In a couple of weeks, if things go well, I will be running a hex crawl in a shared world with two other referees (Alex and Peter) who run dungeoncrawls.

Since we've already got two dungeon games, my wilderness game is not an intermission between travelling to new dungeons, it's about exploration. The starting area is largely unexplored - there is next to nothing known about the surrounding areas (I believe we're kind-of/sort-of using the Wilderlands of High Fantasy as a reference point, but we're located below map 18 so it is definitely a make it up as you go situation).

Our shared game world is using a mix of Alex's Halberds and Helmets (hereafter referred to as "H&H", player rules(english and german) and referee rules) and original Moldvay/Cook B/X ("B/X"). I originally intended to run the hex crawl straight out of B/X, but I've had some difficulty reconciling that system with the style of game I will be running.

Our sessions are short - we have a two-hour time limit - and with three of us alternating on the same day of the week, we try to keep things simple enough so that people can jump right back in without a lot of recap or discussion.

Everyone picks a randomly generated character and hirelings from a list pre-generated list, and they all start at level 1

Alex has his own hex crawl rules in H&H, but they're a bit too "rules-light" for my needs; conversely, the B/X rules have some depth but are not overwhelming, but are either potentially amazingly deadly or a bit of a grind for higher-level characters. In addition, for either system I would need a separate method of determining whether players discover something - our world is being generated as it's explored, and I want to minimize the amount of content I hand-place on the map.

As all of the characters are level 1, I started thinking about how encounters would play out, so I simulated 14 day/night rolls using the H&H method, the B/X method, and using the Flux mechanic from Traveller 5.

To make things even more challenging, there is no healing while travelling. Players can only recover hit points while in a settlement or other safe area. There are no clerics in H&H (they're just magic-users with a religious devotion), and no one is making or selling healing potions or concoctions.

I tested results by generating 14 day/night rolls and comparing the results from the H&H and B/X mechanics. For flux, the daylight roll was the light result, and the nighttime roll was the dark result. I did this test using the actual dice I will play with, not with a PRNG. I could've used the 2d6-7 method, which would've generated the same result.

H&H uses one roll during the day and another during the night, with a table that varies by region. Using a clever mechanic, it can generate day or night encounters from the same table. The chance for encounters is a flat 1 in 6 for either time.

B/X uses one check per day, unless the referee decides to do more. The chance for an encounter is determined by the local terrain, and there are tables and nested tables to determine the specifics of an encounter. I opted for a single check during daylight, and another for night.

B/X generated 5 encounters for the clear/grassland terrain (which in this game is not really present except around settlements); it generated 10 encounters for woods, river, desert, ocean, hills, or barren, and 14 (!) encounters for swamp, mountains, and jungle. Most of the terrain in the area fluctuates between woods/river and swamp, so that is a problematic result for a party of 1st level characters and their retainers, not to mention a *really* slow exploration game where the sessions are limited to two hours at a time.

Flux is a simple mechanic - roll two differently-colored dice and subtract the darker color from the lighter. Alternatively, one may roll 2d6 and subtract 7. The result will be a number somewhere between -5 and +5, with a tendency for results to cluster near 0.

That's just too many encounters for a game that takes place in 2-hour sessions, much less for a group of level 1 characters.

I think Flux will be a good fit for me and the game I want to run, but I'll have to explain why and how in the next post. 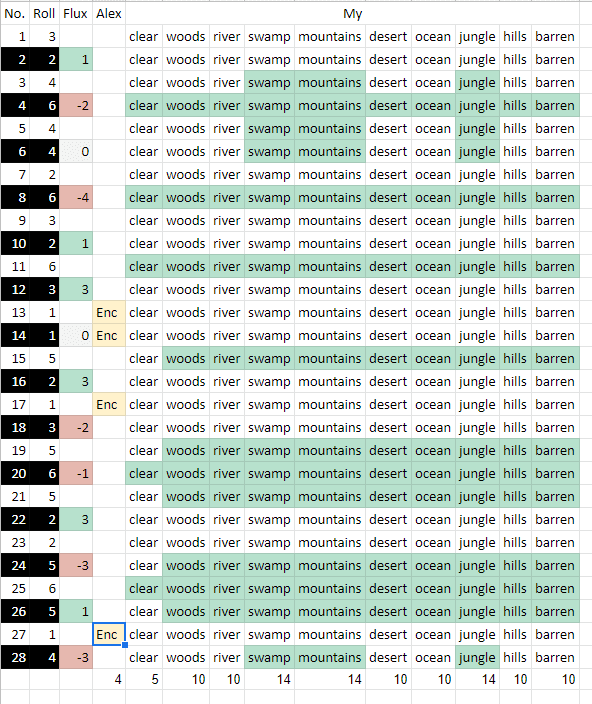 continue on to part 2