"Corpse number 6 is a male, aged 30 - 35. Clothing and dentition suggest subject was a lower-class resident of Sterntown, possibly crew. Severe perimortem bruising in the thoracic and cranial areas are consistent with blunt force trauma.

"... trace evidence found on the corpses clearly indicate Ash Plague intervention in the assembly, revivification, and weaponization of the 'corpse-raft', though the precise ritual and magic used are unknown at this time. I was unable to perform field identification of the genus of the burrowing worms, and lacked sufficient equipment to bring back 'live' samples for further study.

"The design and placement of the corpse-raft 'trap' lead me to believe this was an active defense of the sort used to control otherwise unobserved traffic areas at the outer limit of the Ash Plague's sphere of influence. The use of the gasses of putrefaction to propel the burrowing corpse worms is an ingenious example of the Ash Plague's 'least-cost' ethos; a horrible testament to their embrace of "Reduce, Reuse, Recycle".
Posted by Frotz Self at 09:55 No comments:

While my Merrowman Scavenger, Rasp, is having the side-effects of a potion of scabrous healing undone by the Fisheye tribe's fleshcrafters, he's going to be unplayable for a few sessions.
In the interim the regulars in our HMS Apollyon game decided to all see what life was like on the other side of the tracks, and roll up 1st-level Passenger class characters. On the Apollyon, Passengers are similar to elves in B/X - they can fight and cast spells. More information on the Passenger class as designed by Gus L., our DM, can be found here; I also put together a little PDF that has the rules (but not the spells) for the Passenger class; that can be found here.

Anyhow, here is my Passenger - Anatola Černý - debutante of the weather deck: 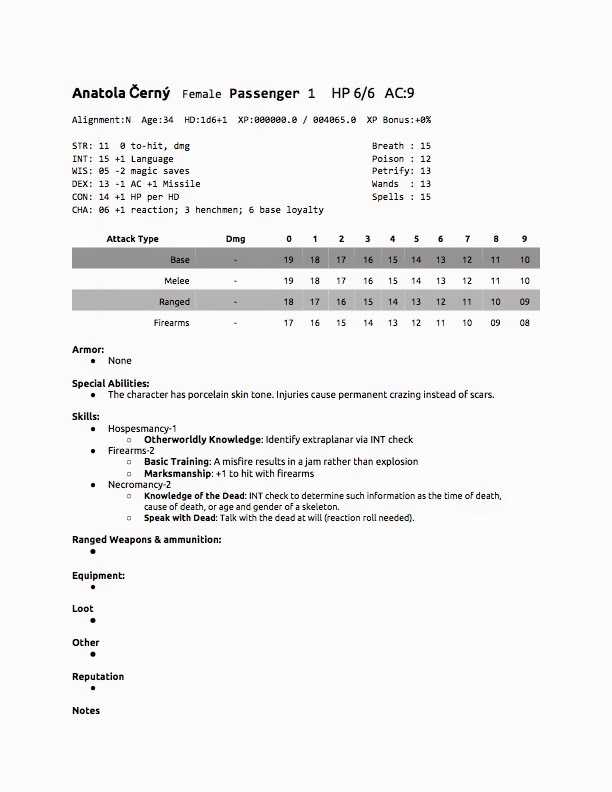 The morning of Monday, 15 October 1066 breaks on East Sussex, offering a bleak preview of the dark days to come.

On a hill some two leagues northwest from the town of Hastings the corpse of Harold, the God and King of England, lies among those of many of his followers. The Conquerer and his worshippers, victorious, bring their infernal language and customs to your land, seeking to consume its riches and remake the land and the people in their own image. Some warrior-priests already whisper of joining The Conquerer's fold to regain the divine power lost when Harold was killed. Others choose to wait until the Archbishops can divine the identity of England's true God and King. As always, sorcerers continue to practice their works in secret, concerned only with the power hidden throughout the land. Warriors align themselves in the direction they think will give them the most glory and power.

What will you do?
Posted by Frotz Self at 11:12 No comments:


"... well, that muttonheaded little fool won't return the cane! Things weren't looking too good for us, you know. Then I remembered this little iron pigsticker, and that got me thinking [shows cold-iron phurbu].

"You remember when I told you about Bear? I know, I know - He has no power here. But our shamans taught us the gods brought Chaos upon the world, and Bear's way was to stand firm and ferocious against the onslaught of the disorder the gods unleashed.

"Bear may no longer keep me in His claws, but His plan for me would not change - men are foreordained to follow the path the Spirits lay out for them. I must align myself with those who oppose the Chaos - this dagger was a reminder from Bear that I am to pursue that path, even here.
[laughs]
"Besides, that Malchris is downright courteous compared to my old man. At least I know where I stand with the fellow, and his rewards are commensurate with the risks.
"As a matter of fact, you might be interested in some of what he has to offer. Do you remember when you told me that you ..."
-- fragment of conversation overhead between Purple Annar and a resident of Sterntown 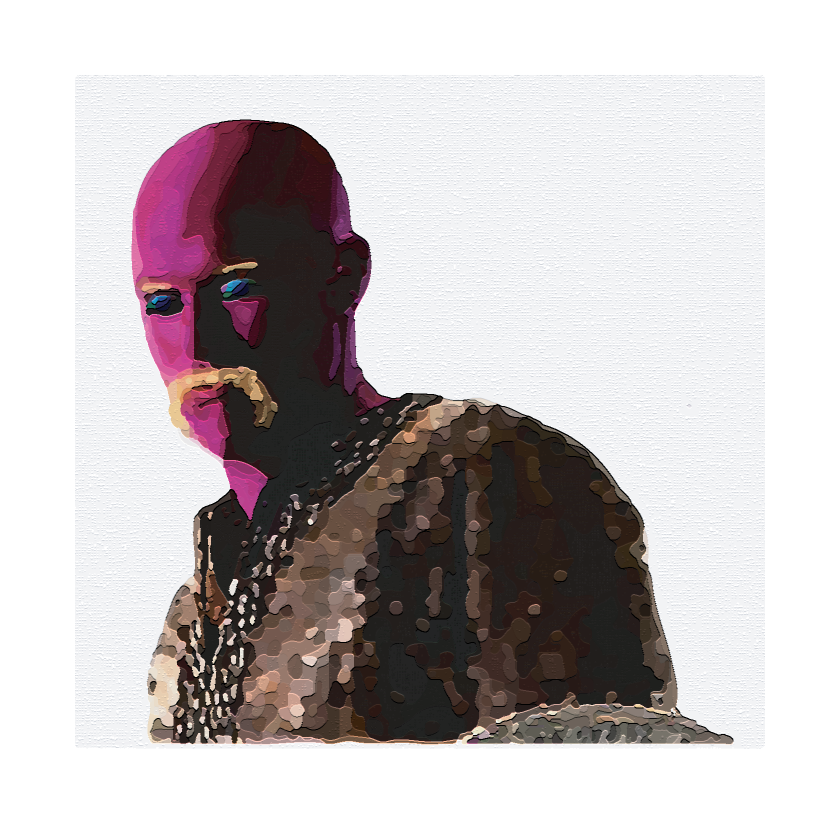 "... it was a hell of a fight. This pink bird-looking thing, all lopsided and as tall as two men, comes tearing out of this circle made out of powdered iron. Huh? No, we didn't touch the damned circle - it must've been smudged by something else. I think there was one of those big candlestick-pole things that was tied to the door or summat, and that must've scraped it.
"Anyway, as I was saying, this big pink-feathered bird-looking thing, but with three arms and a lot of eyes on one side of it's head comes charging outta that circle, beak wide open, screeching "Free! Free! Kill! Kill! Kill!" I damned near pissed my trousers right then. It picks up this table like it was nothing, and throws it out of the way. I'm standing there, trying to keep my sword and board between it and that big priest I know you've seen and one of those little frogmen while they whip up the last of their magic. That hole there on my shield? That big bastard's beak did that, first thing. Hell of a fight.
"The priest's hired man or sword brother or whatever he was got pasted by the pink bastard, but not without honor. The rest of us managed to hang on, until that priest finally put it down for good. Gods, but we were chewed up and spit out. Hell of a fight.
"No, I'm not from here. From the Great Beyond, or whatever you folks call it. I lived in a place that was ice and rock, and little else. The sea, though - I know the sea. Grew up fishing; that's what you do when you're your father's second son. At least until you're old enough to raid. Which I did.
"Another drink? Sure, I'll spot you one. Tell me your tale, friend. I think I'm going to stick around the Rust Gate, at least until I finish healing up. After that, who knows? I'm sure there's work for one who's looking, and I need to get to know the people."

-- overheard  in a bilge saloon in the Rust Gate of HMS Apollyon
Posted by Frotz Self at 23:31 No comments: